I'd just finished this one up last evening. From By The Bay Needlework, this is Donna's "Autumn Cove" stitched on 40ct Silk Gauze using the same fibers she called for. I've not mounted it yet - obviously - but did include a quarter so you could see the size of the finished needlework. There is a mat board that is a blue-marble .. that's what I'm going to use directly behind the stitchery as the mounting board. Will look like a blue cloudy day that way!
I've not yet had time to lay frames and/or mounting boards on it yet ... so I'm not sure if it will have several autumnal shaded mats with the frame, or just a large striking frame to set it off! I'm really pleased with this one .. the colors are incredible and it is easily the most lovely gauze piece I've done. (as of today, that is
Posted by Deb at 9:02 PM 1 comment: 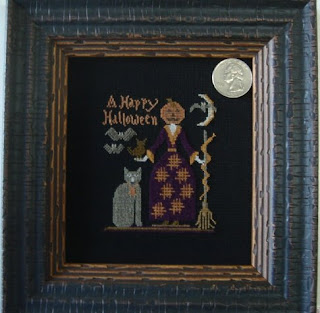 I know I'd shown these pics to you prior, but here they are back from the framer so you can see how I had them finished off. I added a quarter to each design so you could get a better idea of the actual size of the finished piece.

Carriage House Sampling's "Happy Hallow'een"
was stitched on 32ct Black Silk Gauze (which Kreinik is currently having problems getting back into stock). I stitched it with DMC floss and had it mounted on a black Suede Mat board as the backing ... to absorb the look of the gauze and make it look more like fabric. I love the frame .. all crackly, deep browns and golds. 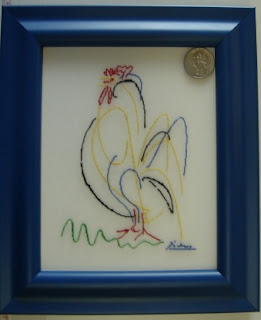 This one is "Picasso's Rooster" from Ladybug Designs. I don't know why this one appealed to me so, but I'd seen it offered as a kit over a few years in catalogs like The Stitchery and have always loved it. But .. I do not care at all for kits (other than those the designers have put together) .. and during the Online Needlework Show saw this designer 'showing' and found you could get the chart only and jumped on it .. for the shop AND for ME! It's on 40ct Silk Gauze, but I had my framer put Spacers between the gauze AND the white mounting board. This way you actually get a bit of 'shadow' from the stitched lines when you look at it from different angels. It was a 'hey let's try it and see what happens' and ... I LOVE the effect!!! 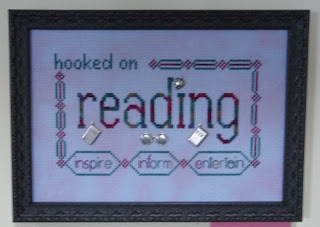 When I wanted to stitch Handblessing's "Hooked On Reading", I didn't have the color fabric in stock that the designer called for, so I pulled the colors used and started laying them out on what I did have in the shop. I decided on hand-dyed Jobelan Blueberry ... loved the look of purples and blues mottled together! 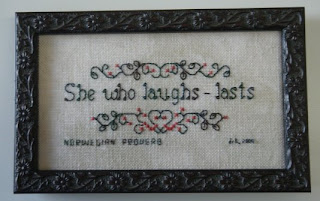 One of the June Freebie Charts Of The Month that we were offering was In A Gentle Spirit's little Norwegian proverb. Since that past month or three have been 'hell', I figured this one HAD to be stitched up by me FOR me! I used "Earthen" from Picture This Plus and since there are only two shades of floss used, chose a coppery-red for the flowers and a deep green for the lettering and vine. Hopefully I'll glance at this one often .. put it where I can see it from my stitching chair .. and remind myself ... as long as I can laugh about it ... I'll survive!!

I'll start with the 'dying'. At the Summer TNNA Market, I took a class 'just for me' ... nothing for the shop, just for me! What a treat! It was 'How To Dye Yarn'. Now, I don't knit nor do I have any plans to, but I contacted the instructor prior to signing up for the class to see if this technique would also relate to wool batt .. for felting. When I was told it was the same principal,
I had to take it! 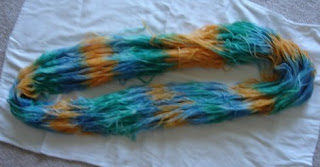 We started with the undyed yarn as shown above, and t

hen this is how 'mine' turned out!
There's something 'weird' that knitters do ... they purchase a completely knitted 'blank' ... looks like a hand-dyed scarf ... and then they pull it apart into yarn again and knit something else out of it! The first two pictures are of a 'blank' blank in the process of being dyed to the 'student's own' design. 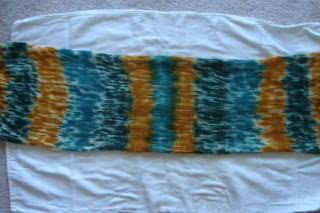 I had already decided that MINE would stay a scarf .. so Diana is going to finish off the long edges so that they will not come apart! The colors look really 'blue' here ... it's a pumpkin yellow, teal blue and a deep teal green.
It was a really fun class! We were warned to bring an apron or smock of some type so that we would not get dye on our clothing. I realized the night before the class that I had the tee-shirt I was going to wear over my clothing at home! Luckily, the hotel 'loaned' me a 30-gallon trash bag! (they didn't want it back though .. so perhaps they really gave it to me!)

Since I was wearing a black skirt that day for the trade show, I think I looked quite fashionable! So fashionable that the gal behind me who also forgot a smock really thought I had a great idea. So we shared it .... just tore it down the center and made two halves ... add a neck hole and arm holes .. and ta da! Two Dyers = Dye Proof!!!