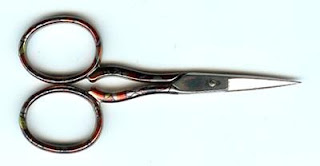 Good luck with those scissors!
Posted by Deb at 4:36 PM 5 comments: