I wanted to share with you my latest, back from the framer, silk gauze 'masterpiece' ... from Blue Ribbon Designs, this is "Americana Panorama" on 40ct. 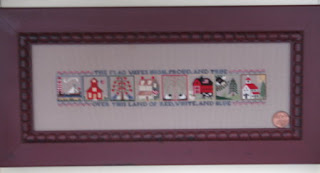 I chose a 'backing' mat board that was as similar in color as the Woodsmoke fabric Belinda chose for her model, but the ivory gauze lightens it up a bit. The frame is from Eastside Mouldings and is a deep country/brick red.
HAD I KNOWN she was going to be doing a "Winter White Wonderland" panorama (not released yet), I would have waited! I'm such a winter/Christmas junkie when it comes to stitching, and have never owned a single patriotic stitchery ... oh well, I do now .. and I really like it!!
It's on display in the shop now where you can easily 'see' it!
And I just updated my SPECIALS page of my web site with ALL the SPECIALS AND SALES that will be going on during the month of OCTOBER .. in order by date .. go take a look-see! (if you do not see October with the flying witch at the top ... hold down your CTRL key at the same time as you click on the refresh symbol!
Posted by Deb at 10:25 AM 3 comments:

What an exhausting week last week was! LouAnn, Debbie and I were all walking attempting to talk zombies by end of the day on Saturday .. but all Market goodies had been sorted through and put out on display, boxes thrown out, and invoices stuck where invoices go. It's a good thing! Another good thing is being able to sleep for 13 hours STRAIGHT on Saturday night/Sunday morning!! Not Dave, not the dog, not the cats .. no one woke me up! That felt good .. and then I just kicked back and read/stitched the day away. And that was a good thing too!
I was thinking about the upcoming A Stitchalot Weekend Oct. 16, 17 & 18 .. and have decided NOT to teach the witch felting class I was thinking of doing. 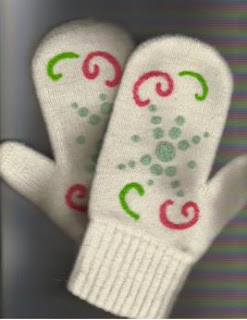 INSTEAD ... you will have the opportunity to purchase a kit or kits ... and learn the technique right there so that you will have a completed project to take with you when you leave the weekend. You'll get me to answer questions and assist or teach the technique to you as you do it ... kind of a one on one, but FOR FREE (yep - I'm free that weekend - LOL), and when you want to learn it.
I'll have a variety for you:
Needle Felting (1) with the new Mitten Kits, either go free style and artistic yourself, or follow a paint stencil for your design.
Needle Felting (2) with the kits fr 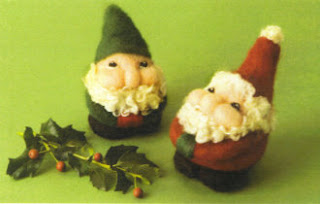 om Lorna where you start with a pre-felted body egg shape and go from there.
Artfelt Felting .. where you'll be creating a small purse pouch/pocket with your 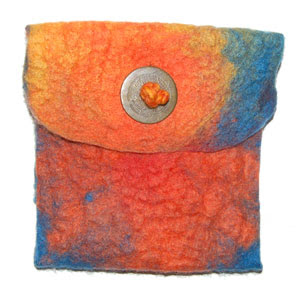 choice of fibers and embellishments. aka = wet felting the EASY way using your creativity in layi 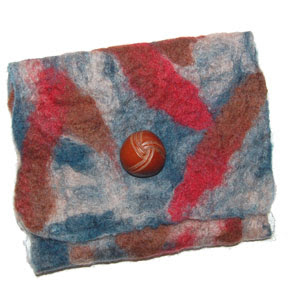 ng out the wool 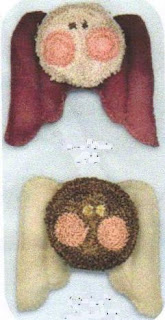 s AND using a dryer!
Needle Punch .. from a new designer I found at Market are the most adorable little Angel Face PINS to make and wear. There will also be a little "Snow Girl With Holly" available as well!
All you need to do is purchase your kit or the supplies needed (and I'll have everything in the SNT Boutique there at the hotel, and then I'll take it from there for you! All 4 types of projects are very quick, incredibly easy, and you can take one or two or all whenever the mood suits you - not at a scheduled time!
We're gonna have FUN!!!
Posted by Deb at 5:17 PM 1 comment:

MARKET WAS PHENOMENAL!! What more can I say? I honestly think that this Market was perhaps the best one in a very long time .. less rushed, quality designs wherever I looked, and more fun! There were not as many shops attending that there should have been (IMHO) and four of the scheduled vendors/designers were not able to attend due to health issues or duplicate booking issues, but .. we had 5 FLOORS to peruse! And besides the counted threads and needlepoint, there were some knitting, some punch needle, some accessory bags or embellishments or gadgets or lighting supplies, and a couple that carried felting supplies. I managed to get into every room there I believe .. of course I hit my cross stitch rooms first, and then on Sunday, after my 'scheduled shopping rounds' were completed, I got to do some "deb shopping" just for me!

I taught my Silk Gauze Class Friday morning and I do believe it was a success! That's what I was hearing that is, from not only the participants later on the shopping floors, but also from some other shops AND from Kreinik ! That afternoon I took a felting class from Judy Bielec .. just for fun .. where we created a 'witch head' .. that was another FUN fun FUN class!!

My BFF Sharon (who lives in Jackson MO, just above Cape G) arrived on Friday afternoon. So after a bit of dinner, we were able to do some of the 'early bird' shopping with those designers who decided to open early for us.

I also had some of my gauze models with me, so offered them for display to La D Da ("Friends Forever", "Leaping Cat", and "Girl In Red Dress)), Carriage House Samplings (look at her blog link from here you can see her room; the 3rd picture down shows my "Happy Hallo'ween" laying down flat, with hers' standing up at the left), Erica Michaels (her "Random Threads" in an Olde Colonial Treasure Box), and Michelle Ink's "Outside The Lines" (she had her stitched piece there and hung mine above it .. how cool to see them together like that!)

Saturday we shopped together like fiends, and ordered pizza in that night so we could sit in the room and I could start adding to my web catalog while she started packing boxes she'd brought for me. Sunday Sharon had to leave before noon. Hugs all around - it was SO GOOD to be able to spend time with her!!

I borrowed a 'flat cart' from Matt at Norden Crafts about 3:35pm with promises that I'd have it back in their room by 4 minutes to 4:00 (when Market officially closed), and hauled butt up to my room, loaded up *5* (count em .. FIVE) Boxes of merchandise, and off I went to the in-hotel UPS room .. where I was leaving them to be shipped home to the shop. No way could I bring them back with me, not flying like I was! I did have some items 'in one suitcase' (I'd brought an extra inside my first suitcase just for that purpose). Some shop owner in the elevator when I was heading to the UPS room made a comment about my 'breaking my room down early' (which is a no-no IF you are a vendor) .. I told her I was a 'shop' but apparently she didn't believe me as she reported to the Show Staff that there had been a vendor all packed up before 4pm ... sigh).

Baggage costs on flights now is crazy .. Delta/Northwest charged $20 for the 1st bag, $30 for the second, and IF a bag was 50# or over, it would have been an ADDITIONAL $90 fee! So .. it cost me around $83.00 to ship product via UPS back to Michigan, and $70 just to get my suitcases back and forth!!! Dave suggested that next year, so I could still spend time with Sharon, I should fly only ONE-way, and then he'd drive to MO and pick me up along with all my purchases and bring me back home. That sounds like a winner .. and a major money saver too!!

Flying back .. got on the plane to head back to Michigan and the first thing that's announced is that there is some 'problem' with the plane and as soon as they get that fixed, we'd be on our way. Comforting! Then got on the connecting flight from Detroit to Flint where I got to 'argue (nicely) with the flight attendant about my Kindle .. I had a book on tape and also a book to read downloaded to it. They had announced all wireless electronical devices be turned off. She walked by and saw me reading .. I told her it WAS off. I even pointed to the icon that SAID off. She said I had to turn it off anyway. I told her since it was off, I would be unable to make it any more 'off'. She said it was on. (sigh) I told her that even though she could see words on the

page (screen), the device was off, it was a memory battery operated, there was no wireless .. that I could put the screen saver on, but it would still be the 'same off' that it was right now.

Then we were told by the pilot that dye to weather conditions, it would be a bumpy trip, and that we would be flying 'low', under 4000 feet, to try to avoid most of it. Then he told us there would be about a 25 minute delay on the runway due to the amount of planes taking off. After sitting on the runway in position for about 20 minutes, he came back on the speaker and said there was a problem with the passenger door not closing properly and we were ordered back to the gate to have that fixed/checked out. (I kind of figured since we were going to be under 4000 feet anyway, there wouldn't be any worries IF the door blew off .. it was a 20 minute flight anyway so we'd just be a bit chilly, but .. I'm not the pilot so back to the gate we headed.)

A little vehicle pulled up to the plane (I had a window seat near the front) and this guy gets out .. comes on board, and after about 2 minutes I heard him tell the pilot he couldn't see where the problem could be so he was 'signing off' on the flight and we could resume. THEN .. this guy walked back to his little vehicle, got in and closed his door .. which immediately popped back open! He jerked it closed .. and it popped back open again! He pulled it closed again and reached for his cell phone, and the door flew back open! It took him 6 attempts to close his OWN door .. and he said 'our door' was OK?? I was laughing out loud.

Dave picked me up, I got back to the shop Tuesday morning and started on the stuff I'd flew back with me. Yesterday (weds) UPS delivered my 5 boxes full (123# off needlework stuffs) and the unpacking began in earnest with me unpacking, LouAnn entering into our register system, and Debbie beginning stuffing your order bags. Today LouAnn will be ringing through some orders, I'm still unpacking (1 and 3/4 boxes are sorted), and Debbie will still be sorting the items into the appropriate order bags. We were all totally exhausted last night .. tonight will be more of the same I'm sure!

But .. this was FUN .. and it really still is! I had such a great time at St. Charles .. visiting with shop owner friends, with designer friends, chatting with new friends .. I love going to Market and this one was not one to miss!! You can see what Carriage House and Blackbird Designs' rooms looked like at Market if you follow the links to their blogs from this page. You can see what is all new on my "What's New" page - you'll have to look at every page (as it will show by date added there, not alphabetical). I have to go unpack more now!