Debbie's back from her lengthy vacation .. and she brought me a gift hand made from an Indian woman in Arizona! An absolutely lovely beaded silver necklace and matching earrings with polished chunks of Jasper! She said she HAD to get it for me as there were an assortment of jewelry all with notifications of 'healing stones' attached to them .. and this one says" is believed to improve focus without over analyzing things". It would appear she may be trying to 'tell me something'.!
Did a google this morning on Jasper and found the following:
"This stone is a methodical and meticulous worker of practical, down to earth solutions. It has the ability to foster and nurture and its energy is used for grounding and protection. Considered more effective if it is used for long periods of time because it works slowly.
Jasper works well in conjunction with Opals. Recommended for executives as an assist in quick thinking. Also helps them endure stress. Jasper can benefit most with direct contact to the skin. Helps one find stability and balance. Benefits ailments that result from environmental pollution. Boosts the immune system and assist in extracting pollutants and toxins from the body. Helps one become more ecologically aware."

Hummmm .. apparently this is all correct then for me! I have 3 Opal rings I wear daily - so this is good - double powers! I'm under stress (most of it of my own making) and usually have 'fanciful' solutions to my problems. I WOULD like all to be able to see how pretty this necklace is, but if it works best with direct skin contact, I'll have to wear it UNDER a turtleneck.

Best of all, the Jasper has already begun to work .. I didn't throw any trash out my car window this morning, so I MUST be more ecologically aware! Now .. if I could only rememer what it was that I going to do next ??????
focus .. focus .. focus
Posted by Deb at 9:44 AM No comments:

Vacations! I remember WHEN I could go on vacations .. and it was a very VERY very long time ago! (deep sigh) That's what happens when Dave and I are both self-employed .. utilities and food and gas come before fun. I 'almost but not quite' fondly remember when I was on mandatory overtime (6 days a week, 8am till 7pm daily) at the phone company for 3 incredibly long months after we came back from a strike. Those were the days I actually had money left over after a paycheck! But that was all before I had the bright idea to become 'self employed' and didn't realize that meant the days of having extra money on hand were over!!

I 'had' a vacation planned for 'just me' this coming August. On the 14th I was heading over to the west side of the state to Allegan for the Michigan Fiber Fest (312 miles round trip). The 15th I was heading up to Cheboygan for my 40th high school Reunion (226 miles one way). Then the 16th, my sister and I were driving from Cheboygan to Pinconning for my great-nieces' wedding shower(376 miles round trip) and then drive back up to Cheboygan, where I would stay for another 3-5 day helping out at the County Humane Society's White Elephant Sale (I get to sort through used clothing bags and hope I don't touch anyones' used underware in the process!). Then back home (312 miles) and back to work.

The dates have changed. My sister goofed when she gave me the dates for the 'used underware sorting' .. it will be the following weekend!
So now I have this dilemma! Do I do the Fiber Fest, Reunion, Wedding Shower and then drive back home for 6-7 days and then drive BACK to Cheboygan to help at the sale? Or do I skip the Reunion and offer to meet my sister AT the shower? (I will still go to the Fiber Fest!!!!)
And, can I afford to spend that much money on gas and stuff without upsetting my hubby .. who doesn't get to go on any kind of vacation? Not that this is a 'vacation vacation' but it IS getting 'away' for a bit. And I already, in his eyes, get away for a bit *4* times a year what with going to trade shows and that. (and yes, that's work not sight-seeing, but .. !).

Major decisions to make here!
hummmmmmm .. try to find out how I COULD afford this?
Posted by Deb at 11:16 AM 2 comments:

40 years ago last night! Can it be possible? How is it that I cannot remember what the weather was like a month ago, much less a year ago and yet I can remember so clearly other events from so very long ago?
The moon was full that night. My BFF Sharon and I had graduated the month before and were out cruisin' the town in my dad's 1961 Dodge Pioneer and had just done the turn through Proffitt's Drive Inn. We were just looking up to our right at the moon and they announced the landing on the radio! Drove Sharon quickly home, pulled into the driveway and ran into the house .. there was my dad, standing in front of the tv (that's how you could tell something incredibly important was on .. he stood in front of the tv .. I find myself doing that today!) .. and was just in time to see that foot hit the surface of the moon! Amazing that I can see that so clearly and feel that incredible wave of awe after so many years.
To this day, when I go outside at night .. any night .. I immediately look to the stars and just stare. Would I go to the moon if offered a space trip? In a heart beat!

And then the death of Walter Cronkite .. and all the other memories are as clear as day too. Where I was when Kennedy was shot (in phys. ed) . .. where I was when his death was announced (they actually brought tv's into each of the classrooms .. I was in 8th grade Math II). And then I was home sick with the tv on when Ruby shot Oswald and I saw it live and remember yelling & yelling for my mother to get in the living room (we didn't see shootings on tv then, much less see 'death with blood' in tv shows. From then through Vietnam, Watergate, race riots here at home, Chicago Democratic Convention, the Iran Hostage Crisis, watching the news of Cronkite's passing, I've relived a great deal of America's most turbulent years all over again .. and find each memory that I'd had of each event still so incredibly clear.
"... And that's the way it is, Tuesday July 21, 2009" when I don't remember what was on tv last night.
Posted by Deb at 8:54 AM 1 comment:

I think I swallowed an earring! I've done a count and so far have found pairs for all that are scattered around on the counter next to the sink, except for one dangley, and I'm sure I would have remembered it 'feeling funky' if I'd swallowed one that size!
The night I didn't sleep (and it was over 40 hours awake before I finally did .. and slept 10 hours straight), I was going to take a pill. I thought it so strange the next day when I'd not slept at all that the pill didn't work, even a little bit! THEN .. I found the pill .. laying on the counter next to the sink in the bathroom, along with all my earrings and things! I remember taking the pill in there. I remember getting some water in a dixie cup and swallowing it. I do - I really do! Drinking the water that is .. not sure what I swallowed .. if I swallowed. (I'm not going to 'obsess' about it though!!! HONEST)
I did take a pill last night and slept pretty well ... better living through pharmaceuticals!!
Went over to mom's yesterday and she'd done another 180 on me! She was totally back to her normal self, clear, able to remember and talk about stuff, organized and .. just like she was long ago. I wish she'd stop doing this to me! Either be mentally sound or go into dementia ... make up your mind mom .. stop playing with me! Now I have hives again .. and this time there's no real reason for it! So back to anti-itch stuff and more anti anxiety pills. It's really 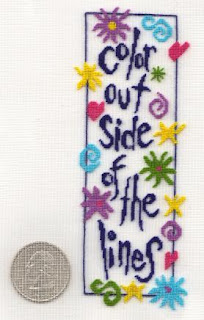 pretty silly ... child of the 60's that I am, I never did pills then! Smoked a bit, true but never did chemicals. Now that I'm well into adulthood .. here come the pills!!!
I'd promised to show you the latest silk gauze 40ct project I'd finished .. this is "Outside The Lines" from Ruby Slipper Designs. This has to be one of the MOST FUN bits of stitching I've ever done! Now to figure out 'how' I'm going to frame it!
And now need another project to work on at home. I've got one I want to do on gauze, but cannot find where I put the chart. I want to do Blue Ribbon Designs' "Americana Panorama"but can't decide if I want to do it on 28ct or 32ct and haven't pulled the fabric yet (I did think about doing this one on 40ct but thought I'd want to hang it high .. and didn't want people to have to get a step ladder to really see it.) I have some little needle felting projects I want to do but haven't felt like needle felting lately! decisions, decisions, decisions. Off to look at fabric so I can go home! Once home, I can do an earring check again!
Deb

26 hours awake .. not my idea, just couldn't fall asleep last night. Had to take 1/2 a pill the night before to doze off, but was wide awake by 2:30am. Not Fun! Stress? Who knows? I just know I would like to be able to sleep like I did when I was 'young' .. when I went to sleep and died for 9 - 10 hours!
Nearly finished Ruby Slipper Designs' "Outside The Lines" on 40ct silk gauze ... the colors are absolutely wild (maybe that's what is keeping me awake??) and this one has been so much fun to work on! I can't wait until it's through so I can see how I want to frame it up.
Having 2 days off for the 4th Holiday was phenomenal!! Dave cut down trees (they're dying all over the place!!!) and I declared war on the two HUGE cedar bushes in the very front of the house. It was very Zen-like work actually; feeling the sun on my shoulders, slight breeze in the air rustling through the trees , the sounds of the birds. But I think I destroyed whatever zen karma I may have been creating by Hacking Madly With My Shears While Muttering Softly To Myself. Took me 2 days to get them cut down, cut in, shaped (not so well) and what-have-you, using small clippers, a pole saw, hedge shears and arm power. You can tell they've been 'hacked', but they actually look oh so much better! I so rarely ever have 2 days in a row with nothing to do so that I CAN accomplish something (and yes, I ignored mom over the holiday weekend .. I'll see her tomorrow)!
Posted by Deb at 8:37 AM 3 comments: