Writing N Deciding What To Do

Woke up this morning trying to figure out: (1) IF I was going to go into the shop and 'work' today .. making sure, since Monday will begin our 'December-long-get-it-outta-the-shop-so-we-don't-have-count-it-and-get-taxed-again-by-the-government-Sale', that everything that will be put on sale is actually currently featured ON my web catalog; (2) IF I was going to take down all my pictures and stuff and replace them with Christmas pictures and stuff here at my home; (3) IF I was going to work on store stuff and bills and such on the computer here all day; (4) IF I was going to kick back and do nothing but watch DVDs and stitch all day. It's pretty bad when that's your first thought upon waking.
So here I am on the computer working on my blog AND working on store stuffs/bills and feeling guilty because I didn't go into the shop and work alone today. So far I've wasted a couple of hours .. so at least I'm actually doing something!

I DID finish off one of my felted dolls (Beverly) - a Christmas gift for one of my sisters and Beverly looks great if I say so myself - a very elegant lady! It's funny when you're felting a doll - you have an idea of what you're going to turn out, but during the process of making the face, the doll kind of tells YOU what she/he is going to look like! That's what happe 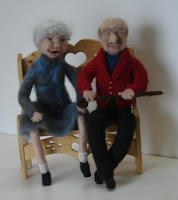 ned with Sid and Sadie .. he was originally going to have a much you 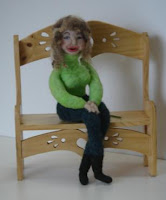 nger girlfriend to share his bench with .. apparently his wife had other ideas! The 'much younger gal' came about later .. she's what Dave referred to as"the perfect barfly" - even down to her lipstick beginning to bleed! I didn't know what her name was for weeks afterwards!
Beverly was an initial reject - I just didn't like her face and discarded her for awhile. Then I went back and pulled off her nose and cheeks, and ripped out her eyes (sounds violent I know, but a very stress relieving process I might add!), and started over. She was going to be an old lady in my mind, but she wouldn't let me do that to her this time around .. and her face came to life basically on her own. Then you start building the body, and then dressing her with wool and she came out once again totally different than what I was picturing - even to the clothing! It's quite an interesting process, and so far I've been quite amused by and satisfied with my 'creations'. I should also mention that 'they' name themselves .. I don't know what they're going to be called until they're finished and I've stared at them for a while. Anywhere from a few hours to a few days later I find their name out - that's what happened with Dave's so called barfly gal. I had no idea what her name was, if she had a name, if she'd tell me or if she was waiting to tell my sister. A few hours after Beverly was created and named, I found out .. her name is Connie!
Dave asked me what I was going to do with those I was making (he'd forgotten about gifties I was doing), so I told him I was making my own little deb-army and they were all going to sit onto the entertainment center staring at him! He made a gun out of his fingers and started target shooting at that point. I think a tiny deb-army freaked him out!
Since the Holidays ARE fast approaching, I thought you might like to have a couple of FREE holiday charts to print out!
The first is from Mari at Whispered By The Wind .. “Style is everything" .. a bit of whimsy to put a smile on your face: http://www.whisperedbythewind.com/happystitching2008
The second is not cross stitch, but would make a fun quick gift or decoration. From Bird Brain Designs, a Jingle Bell Holiday Candle Mat: http://www.birdbraindesigns.net/freedesign.aspx
With that, I've rambled on way too long and MUST get something from my list accomplished today, so ... I'm outta here!

I love your wool people. I hope that you decide to have a class to teach us how to make them soon!

Welcome to the blogging world Deb, I think you'll really enjoy it. Loved the wool people, especially the old couple, too cute.
Sue

Welcome to the world of blogging...I started one a few months ago too! Love your felt people, you are just soo talented!

The deb-army is a great idea!! You can have them on top of the entertainment center to keep an eye on the hubby and furbabies and put some more in the store to discourage the "oh here he/she comes" customers!! LOL
Great job on the wool people! I would love to learn how to do that also, but too far to travel for a one day class. ;)