As you will have seen by now .. my shop newsletter updates are 'back to normal' with stuff about Deb's life that shouldn't be considered 'normal'. sigh .. I live in a zoo!

I actually didn't completely realize I'd slipped away from my 'chatty format' until I received that email from another stitcher. I knew I wasn't happy with my newsletters but ... the obvious reason was totally overlooked! I think part of the problem came from having to write them here at the shop 'after hours'. At home, my wireless no longer works (Verizon says it does though as they show me within their 'area' .. yeah right!!!) and regular dial-up connection is so slow. And with hubby, cats and dog seeking my attention, I'd be at the computer for up to 4 hours (or more!) trying to get the newsletter completed. Then here at the shop, while the connection is SO fast, I'd be here till 8pm with no dinner, blood sugar dropping which meant I'd be wandering around looking at stuff instead of typing (and not really realizing it!) and getting grumpy because I was still at the shop. LOL ... Guess I just got to the 'gist' of the product info and ignored 'me'. But .. back to 'normal'. 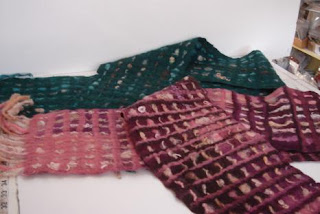 I've been stitching like a mad woman, and also felting scarves like crazy! I did two on Wednesday .. and here they are:
I used dyed wool and some really clunky funky yarn that had bits and pieces of curly locks and metallics and other neat stuff woven into it. Found the skeins at the St. Charles cash & carry Market .. that's the only way I could have afforded to get 'that' yarn' .. expensive even at wholesale, phew, but worth it!
I'm felting the 'easy way' now that the weather has turned and I cannot 'wet felt' outside (or in the garage ... the squirrel throws nuts at me!!!). I'm using the ArtFelt method! It's not as 'zen' as rolling, rolling, rolling by hand, but you still have the 'artistic layout' bit going for you. Here's the FIRST one I did with an Art 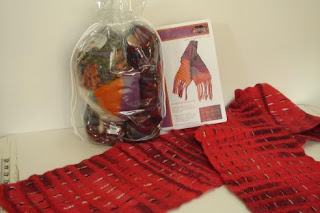 Felt KIT:
All materials and easy step by step instructions come in one easy kit! Really! Check it out here!
That's how I was able to do two in one day. And with some 'inventive thinking' on my part.
I have two 5' long tables that I had put end to end
so I could do the layout. You start with a piece of the ArtFelt paper 72" long, so it seemed easier to try it that way, rather than just have the 'ends' of the paper hanging down on either end of the table.
Problem! As soon as I put the tables up and turned my back ... two, count em! TWO CATS immediately took up residence on the tables and would NOT leave. Ever tried to lay out loose wool and yarn strips with cats right next to you. I don't think I need to say more on that! EPIPHANY!!! Went into the linen closet and got an old fitted sheet. Put two of the fitted ends over the end sides of one of the tables with the sheet hanging down .. instant TENT! Cat city! FUN!!!!!!!!!! Mocha and Padme spent most of the afternoon attacking each other from either side of the 'tent' and I was left to my own creativity in peace (somewhat). The Tent Cat City was such a hit, it's still up and in the living room. Told you .. I live in a zoo!!
Posted by Deb at 8:59 AM

I love the scarves!

What, no picture of boxing cats? :) (Just kidding!)

I take it the live trap has not made it to the garage yet... LOL.
Scarves look great !!!