. .. kind of like a song isn't it? But even if "Cher" were to sing my new lyrics, I doubt I'd want to sing along.
What has happened to personal integrity? Honesty? Common sense? Is it OK to steal from a business but not from a friend? What would that difference be? Perhaps we steal from where we work but would never think of going into our spouse's pockets. I don't know. Is it because 'if you own a business, that person must be wealthy and if no one is the wiser, then it doesn't matter? Or if no one sees you, you must not be stealing? So many things in the world ... you can't afford it, but you want it so you just take it.
There are hundreds of ways to steal, and dozens of excuses for stealing, but only one way and one reason and one law of integrity: That way is honor; the reason is a clear conscience; and that law is God's. He says, "You shall not steal." That means Never. Not in any way. Not from any one. That goes for those of you who com 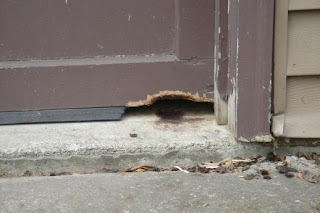 e into my shop and leave as thieves. I don't want to be around you. And today, I nearly wasn't going to be ever again. Had Debbie not been here in the shop with me, I would have left ... and I wasn't going to come back. I don't understand those with no morals or scruples. Those who feel exempt from the rest of the world. And those who 'call themselves stitchers' and then do what they do in needlework shops! You are not the people I wish to be around.
IF I could catch you, I'd drag you halfway through the squirrel-gnawed-out-hole-in-my-garage-door and leave you there!
Calmer now, I thought I'd show you two more scarves .. from Sundays felting: 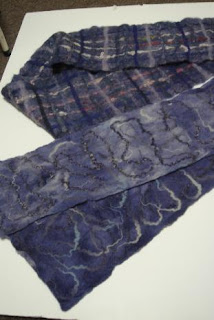 And this picture is of the 'cat tent' I had to make out of one of my two working tables .. so Mocha and Padme would be otherwise occupied and stay away from my bits of wool and yarn:

It's still 'up' in the living room .. the felines are having way too much fun with the battles on either side of the sheet. And besides, I'll be doing some more felting tomorrow so will need 'it's help'!

I am so sorry to hear that you have thiefs come to your shop, how sad and what a poor reflection on us stitchers. I hope today is a better day for you and that the person never returns.

I'm glad you didn't let it get you down for long! I hope the thief has a flat tire on the expressway ... at night ... in the rain!

I *love* the kitty tent. No wonder the cats were having so much fun. :)