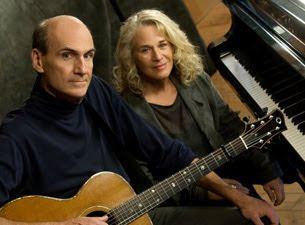 Kathy, with a very LOUD e-mailed  YES!!!!!!!!!!!!!!!!!! agreed to all conditions and even said she has a 'lighter app' on her phone so we can show JT and Carole just how much we love them at the end of the show!
I saw where Amazon has the Toubador cd available for purchase of today and .... decided to wait.  I want to be surprised first at the concert, then I'll purchase it so I can hear it over and over and over again!
Whooo Hooooooo
Posted by Deb at 4:50 PM

OMG, Deb, I have seen JT in concert and it was one of the BEST I've ever seen (second only to Dan Fogelberg). I know you'll love it! Green with Envy!!!!

That will be a great concert! If Kathy changes her mind, let me know. I'd even pay for the ticket!

Deb, going to alot of concerts, we have discovered that the cheaper seats are usually the best. You can usually see the stage. Sitting on the floor, you always get the big fluffy man in front of you and you can't see around or over him. ENJOY

Hope you have a great time. The last time I went to a concert it was Aaron Carter and my daughter was 7 years old. Wow time flys. Have a great weekend
donna