Debby Is My Name and Felting Is My Game!

Actually, now I'm "DEB" since I already have a "Debbie" working for me doing the computer emails and order stuffs .. try to cut down on any confusion, don't ya know?! Everyone still thinks I'm her and she's me and .. oh well.
When I was on my rushed trip last weekend running around the state, I picked up a couple of well-used scarves (2 for a buck, can't beat that!). I wanted to try some Nuno Felting on my own, since the last scarf (which was also my 1st ever scarf!) was made in April while I had an instructor present. Now I'm on my own.
Of course, it was a rainy part of my day off yesterday and I needed a place where I could 'stretch out' and not worry about getting everything around me wet. I decided upon the garage - put up a long table, gathered my wools and silk cap and fancy dancy ribbons and yarns, along with big sponge, pan for water, towel for me (thinking ahead for once!), and all that good stuff needed to nuno felt.
Got really hot in the garage really fast .. so opened the door up to try to get a bit of a breeze going so I could at least breathe. Nick was outside with me, running out of the garage into the rain, running into the garage out of the rain, running out of the garage .. well, you get the idea. I
finally decided to just ignore him (until he came back, not only soaked but full of burrs). Then I let him inside .. let Dave have some quality time with his dog. 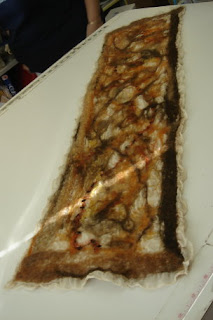 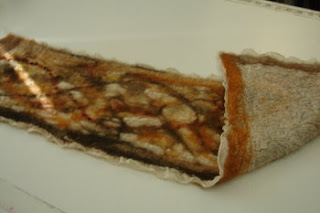 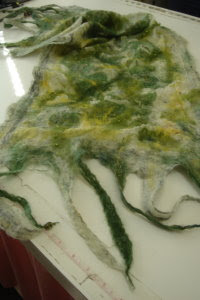 This was my first project completed. The scarf started out as a white silkish LONG scarf, so I ended up 'coffee dying' it when I was through with the felting. You can't really see well here, but there are metallics running through it in some yarn as well. The image on the right shows you what the back of the scarf looks like ... all puckery and with a really neat texture look!

Then I decided that I might as well try one more. This scarf (at right) started out as one of those 1960 styles with printed leaves and flowers all over it. Much longer than the 'brown' one (which shrunk up about 30% when completed). I felted the edges (instead of allowing them to ruffle as above), and then left long pieces of wool to end up as edging trim at either side.

I covered the entire fabric with fine splotches (technical term!) of green and pale green/white wool, bits of yellow silk and some dyed green Border Leicester wooly locks. When the felting and fulling was complete, I didn't really like the way it turned out .. the locks didn't felt in as well as I wanted and were really fuzzy, popping up from the surface. So, I thought about it over night while it dried, and this morning added some glass beads to a couple of the trim ends and then started to apply some other beads ... round, square, big, small, beveled ... atop the locks that were misbehaving the most. Attached them with green hi-luster blending filament at the start .. and then when I decided I'd been swearing long enough, switched over to just regular floss. I'm not a 'glitz gal', but this little bit of glam was what saved the scarf from the trash heap.
While on vacation this next week, digging through donated used and mostly crappy stained clothing for the Humane Society's White Elephant Sale .. I'll be on the lookout for silk scarves, icky flowered silk blouses (that I can cut up!), and curtain sheers .. maybe a bit of lace too. All to be used on future projects! 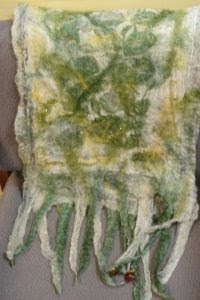 Debby, I really like the green nuno scarf. Did you know that you can continue to felt even after it has dried? Just wet it with room temp water with soap and go back to your favorite agitation method. You can use a glass washboard, felting stone, bubble wrap or a bamboo blind.
When my nuno designs are "fuzzy" after they dry, it usually means it's not done.
You can always go back to felt more, but you can also over-felt and go too far.
As you do more, you'll get used to what "done" looks and feels like.
GREAT work!
Nunofelt

WOW .. I'm honored with your comment Nancy! I've just spent about a half hour perusing your scarves and they are absolutely fabulous!! Thanks for the tip on further felting/fulling later too!

What a clever way to recycle old scarves! These are so beautiful.