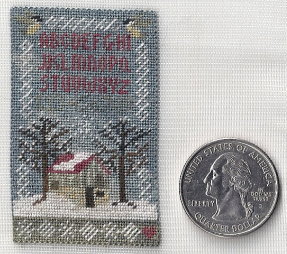 what a beautiful piece stitched over one. And you are doing good on the Wii and the weight loss.
You should be proud. Glad to see that DebFeltIt is going good.

Love your stitched piece -so tiny!

Good for you on the # lost - I forgot to tell you when I saw you a week or so ago that you are looking great! Keep up the hard/good work!