I don't clean often. Oh oh .. that doesn't sound good, but talking about going into walk-in closets that have been used primarily for storage is the qualifier here! In my office .. bookshelves with more books than will fit on them, cross stitch storage areas that you no longer have any idea what could be in them .. under all that other stuff. Basically, a human could no longer 'walk-in' to that space! Mocha and Padme had trouble too. 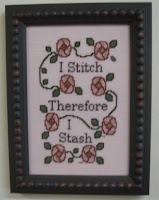 But .. it's enter-able now! Two days of intensive re-arranging, throwing stuff out, sorting books to take to the used book store and to take to a goodwill type center. I still have to 'organize' the stitching stuffs .. books are done .. but that's for another day! What can I say .. I'm a pack rat ... I stash A LOT!!! (the design is my stitched version of Moonflower Designs' "I Stitch" .. I did it on 30ct St.Valentines Day Blend linen from R&R mainly as I didn't have the color linen the designer used and wanted to stitch it NOW.! I did use the fiber colors called for, and thought my fabric was an incredibly close color substitute.)
I have to take a shower - I feel incredibly icky (probably has a lot to do with my finding a huge mouse nest under and in the back of one of my bookshelves and having to dispose of that), and then get my butt in gear to go see my mom. Cleaning was the important item on my agenda today.
But before I do that, I'd promised I'd share some of my most current completed projects with you, and today's the day for that. I'm currently working on Carriage House Sampling's "Happy Hallowe'en" I'd mentioned last time I blogged .. the one on 32ct Black silk gauze. It 'will' look cool .. but I don't like stitching on black anything! 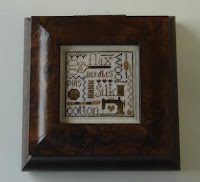 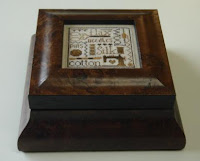 This is "Random Threads" from Erica Michaels .. mounted on a tiny Treasure Dowry Box from Olde Colonial Designs. 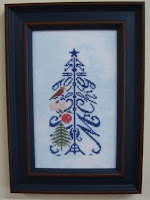 And yes, it's a 40ct Silk Gauze design .. the box design opening is only 2" x 2"!
And the design at right is from Noveau Encore Designs ... I found this company during the online Needlework show. She has 'name trees' with state motifs for every state and a bunch of hobbies/professions too. Of course I can get you whatever you want from her! Can you see it says "Michigan" on the side? And incorporates our state bird, flower, fruit and tree into the design (although our Robin was depicted as a Bluebird .. I had to change the body color to brown/grey from the blue she had.)

OK .. so maybe I won't go see mom today ... I can call her and tell her I'll stop by tomorrow morning instead. Not that I don't want to see her, but I don't think I'm in the mood for sitting and staring at her while she doesn't want to talk to me as I don't agree with her these days. (deep sigh)
I think I should take my shower, put on clean comfy clothes, and stitch! What do you think? Sounds like a game plan to me! Dave's cooking tonight .. that would make it kind of like a little deb holiday,
byeeeeee!
Posted by Deb at 3:19 PM

I hope you stitched!

Why bother with the shower? or clean clothes? Just stitch! LOL!