A two day holiday - what joy! Sleep in (I must have needed it on Sunday as I slept nearly 11 1/2 hours straight) .. laze around .. stay in sleep pants and tee shirt all day long with no cares! And the weather was wonderful .. double joy! Nick and I decided to do some more wet felting.

So we (um, make that ... I) put two long conference tables together, half in the garage and half out, and gathered up wool and bits and pieces of sparkly stuffs and yarns, and went to it. Nick's participation was just in being outside while I was outside .. with occasional forays after bugs, birds, chipmunks .. anything that moved (even falling pears from the pear tree!).
Sunday I pulled some glorious earth toned golds and browns and rusty orange wool roving and started laying it out to make a 'lattice' scarf. I then pulled bits and pieces of other wool and acrylic yarns, some with metallic and tiny pailettes in it, and laid that out along with the thin strips, filling in most of the openings. Wet it down, rolled it up and started working it. 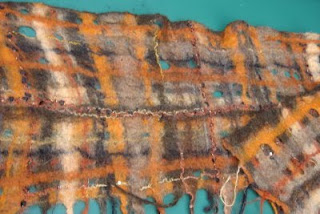 This is what turned out .. one side has more glitz and sparkle to it than the other. Instead of Lattice work, it came out - as Dave refers to it - as "Swiss Cheese". I really like the effect!! 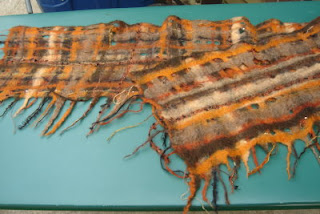 With all the different yarns that were used, and with the sparkly accents, there is a lot of detail to catch the eye!
Sunday I pulled violet pencil roving (deep purples to violets to grey blues) along with some really bumpy purple designer yarn, and started out once again. This again was a Lattice scarf, but a bit 'thicker' in places because of the yarn. Since the yarn was mostly acrylic, I had to put some wool underneath it to give it something to 'grab' onto and felt. 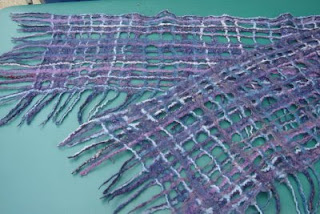 Like the gold/brown scarf, there is a bit more texture on one side due to the bumpy yarn used than on the other side. 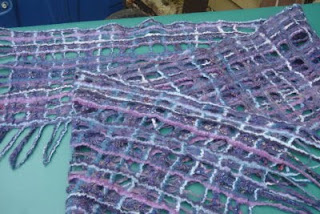 Since that had gone well, and it was only about 12:30pm, I decided to do one more.
This is really 'zen-like' ... I had the radio on so I could time the rolling (5 minutes at a time = two songs) .. the music fades into the background, the birds were singing, the bees were really buzzing around the pear tree .. mosquitoes were biting .... oops, not zen like!! (On with the Deet) You can think with no distractions. And I found that I actually was planning this second scarf while I was working on the first.
I wanted it to be mostly black but the Pencil Roving I had was more pale grey to whitish to deep grey and just wasn't giving me the dark elegance I was looking for. Luckily, I had extra black merino so I started laying that out in thin strips intermixed with the greys. I also had some cool yarn that was made up of bits and pieces of bright shiny color on 'string', so I intermixed that as well. Then I decided to bring some of the color from the yarn out to give some drama to it. Red merino wool and red wool 'curls' were the ticket! Along with some other black yarns that had a bit of funky twisting to them. 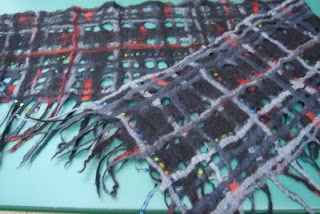 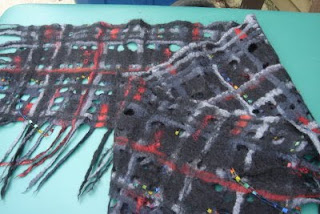 As with the other two, one side has a more glitz and color to it than the other side. And, another 'swiss cheese' effect!
The down side? I HAVE to find a much higher surface to work on. My two tables are too low for all the bending and rolling that has to be done. My back was killing me all night long! I also would like to have a spot where I could work on these in the house .. not sure how they'd turn out in the garage in the winter. I just get too much water all over the place, so inside as our house is now is NOT an option. But .. I do like the scarves!!!
Posted by Deb at 5:39 PM

The lattice look is really pretty!